Parsley is one versatile herb you NEED in your kitchen. I feel bad seeing people buy it at the market since it’s so easy to propagate on your own.

Organic parsley, while not expensive, can be grown in a “cut and come again” fashion so you always have some at your disposal for your next gremolata, hummus, or tea.

Never buy it again from the supermarket when you can grow it at home by a sunny window with ease.

You can grow parsley from seed, cuttings, or you can buy pre-grown plants from nurseries. But for extra fun, try regrowing it from grocery store cuttings.

Note that this won’t work 100%. Successful rooting is YMMV. Some cultivars may be sterile.

The growing conditions may be poor. Or the plant may even be patented, which makes it illegal to regrow- always check for this.

However, if you’re willing to take home some supermarket parsley cuttings and then try to regrow it yourself for an endless harvest, why not? 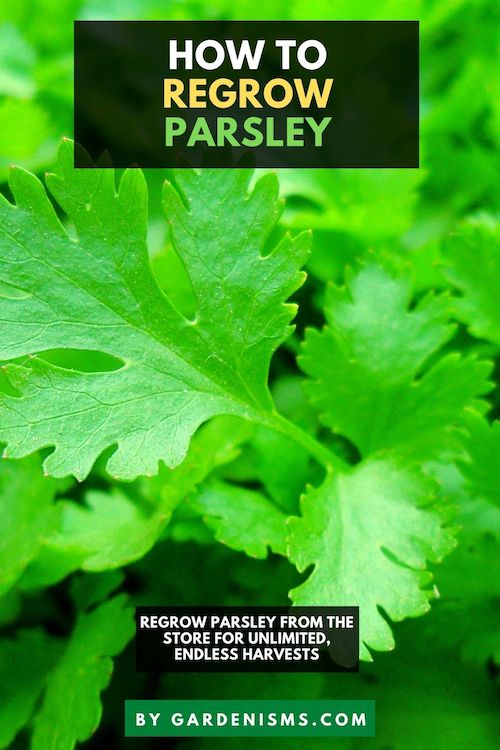 With some TLC, you can score your organic parsley for your next kitchen expeditions!

It can be grown indoors with minimal care. You can even grow multiple plants for extra bountiful harvests.

How to grow parsley from cuttings

Growing parsley indoors is easy. First, it starts with the parsley itself.

Choosing a nice healthy bunch from the store is key to increasing your odds of it rooting.

Parsley sold in the store is usually grown in poor conditions. They’re grown in crowded pots with forced grow lights and generic soil.

While praise looks good in the market, they usually wilt within days. They’re grown this way to obviously maximize profits for the growers but last long enough for consumers to eat before they go bad.

Propagating store-bought parsley generally has a low success rate, so you should plant bunches to maximize your chances of rooting.

When you take parsley home, wash it well then give it water. The bunch should be separated from the twist tie. Then inspected for damage or pests. Each stem can be utilized for cuttings.

Since parsley is so cheap, getting organic makes sense. This will be your starter parsley. You’ll be growing it from these stems.

Here are some tips on choosing good seed parsley to use for your first batch:

While you’re out, pick up some organic potting mix and some potters while you’re at it.

While growing parsley using cuttings isn’t the typical way compared to seed starting, it’s a neat little project for anyone up to the challenge.

If you choose to go organic, you should get organic everything. This includes soil, plant food, etc. Or else it’s just partially organic. Food for thought.

Here’s a video that shows the process on YouTube:

So you’ve chosen some bunches of parsley from the supermarket. The next step is to prep them for planting.

Grab a pair of scissors and sterilize them using rubbing alcohol. This is important so you don’t transmit any plant viruses or bacteria.

Parsley can get root rot which can destroy your cuttings. This plant already has a naturally low germination rate. But the cuttings have a low rooting rate as well. So you want to maximize your chances of successful rooting.

You can take cuttings from a neighbor or friend who may have some fully grown parsley.

Optional: Some people just leave their parsley cuttings in water until they root. This makes it easier to monitor for rooting.

You can give your stems a gentle tug to see if they’re rooted for those who planted in soil and can’t see the roots offshoot from the stalks.

You want them to root at this point. Using a clear jar makes it easy to monitor the progress of roots. After 2-3 weeks, you’ll see small white stubs poke out of the cut end. These are the roots.

If they start to grow brown or green mold, start it over. Sterilize the container with your new batch. Algae may form if left in direct sunlight for extended periods.

When your cuttings grow strong roots, you can get ready to move them into the soil.

You have the option of keeping them indoors or moving them to the garden.

While you can root parsley in water, you shouldn’t leave them in it. They’ll grow poorly and won’t give you optimal taste or size.

Parsley can be grown indoors if conditions are perfect.

It’ll need 6 hours of bright, direct morning sunlight. It’ll need to be constantly moist. And the ambient humidity should be high.

As with most other garden herbs, parsley gives the best taste and texture when grown in the garden outside rather than inside.

But for those in hardiness zones that don’t allow it, indoor growing is a possibility.

Can you grow parsley in water?

Parsley can be initially grown in water.

This is only when you’re waiting for the cuttings to root. You can grow parsley in a mason jar during this period, but once it does root, it needs to be transferred to your soil substrate.

If you leave it over water, likely get stem rot which will kill it.

BUT. If you’re using a hydroponic system, it’s possible. However, this isn’t easy or cheap.

Transplanting into the garden

After a few weeks, your cuttings will grow a network of twisted roots.

This is a sign that it’s time to move them outside for max growth!

When exposed to natural sunlight for at least 6 hours daily, your parsley will get that nice zesty taste. They’ll also grow darker in color, fuller in size, and just more virulent.

Sow into your yard in late February or early March.

If you’re in zones 4-10, you can wait until May to plant them because parsley doesn’t like the cold. Temperatures will pick up in the summertime.

Place each cutting into its individual pot. Make sure the planter you’re using is well-draining. It should be equipped with multiple drainage holes on the bottom.

Layer some sand or pebbles to help further increase the drainage.

You can put a 1” layer of rocks or sand at the base so it doesn’t clog. Plant the parsley with the roots completely buried in the soil. Older plants have very long roots and will grow to the entirety of the container.

Once you plant, you can’t go back! Parsley doesn’t like to be disturbed once they get used to their pot.

Upon first moving them outside, the cuttings need to be hardened off.

Bring each pot into the garden for a few hours each day over the course of a few weeks. This is known as acclimating your parsley.

If you just put them outside in the sun, they may scorch since they’re not used to the sunlight. This doesn’t need to be a chore- just give it some light for increasing hours each day. After 1-2 weeks, you’re all set.

Parsley will need at least 6 hours of direct full sun. If you have an east-facing window, put it there because the morning sun will be less scorching than the afternoon sun.

It may also help improve the taste. Sunny window sills are good. But if you don’t have one, put it next to a bright window that receives direct sunlight daily.

You can also grow parsley on the patio, deck, or balcony. The key is to keep temperatures stable with decent humidity. If there’s not enough moisture in the environment, the parsley will dry.

Every week, rotate the pot so that all sides of it get equal sunlight distribution. If you don’t, it’ll become straggled or uneven.

Harvesting is an art. You can’t just dive in there and then rip off leaves without thinking.

The right way to harvest is to take new leaves from the inner crown of the herb.

Parsley sprouts the sweetest leaves when they’re young. The older leaves turn bitter and tough. Use a sterilized pair of pruners to cut.

Be sure to pick off ripe leaves regularly. If you don’t, they get old and tough. Regularly pruning your parsley encourages it to sprout new leaves.

So while it may be counterintuitive, you’re helping your plant grow by picking it!

Younger plants will need around 10 weeks before you pick them for the first time. Depending on how much parsley you use, grow multiple stalks if necessary.

Prune them on the low stem and not directly under the leaves.

If you want to maximize the harvest, cut as you need them throughout the season. Don’t let single pieces grow bitter and hard.

Prune them off when they’re young and sweet. The older leaves can be used for compost.

When the season is over, you can harvest the entire roots of the herb. They can be sliced, roasted, or dried. The parsley roots look like parsnips, which you can also regrow! They have an earthy taste similar to carrots or basil.

But it’s good to utilize the entire plant rather than just the leaves. Be sure to collect some seeds to save for next season.

Parsley is biennial, which means it can only grow for two seasons. After that, you need to replace it. Fully grown parsley will grow offset roots, which can be taken as cuttings from it.

This is how you propagate parsley for the next generation once you have established plants.

Here’s how to take cuttings from grown parsley:

Parsley will go to seed the second season.

You’ll notice that the leaves aren’t as aromatic or the yield will be smaller.

Collect the seeds from the flowers and then start a new batch! This is how you get unlimited parsley for free.

Does parsley regrow after cutting?

Parsley is a “cut and come again” type of herb, which means that you can constantly trim a piece off when you need it.

It’s a hardy herb that can be used from spices to garnishes.

You should be cutting it regularly, as this helps the plant grow even more. Use it or lose it.

How long does parsley take to grow after cutting?

When the parsley is still young, give it 8-10 weeks to grow before you cut it.

But once it’s fully grown, you can take cuttings whenever you need them. It won’t harm the herb if you cut it in moderation. It’s actually good for it.

Aim to take cuttings from the inner crown where the leaves are the youngest because the outer leaves are no longer ideal for eating.

Grow multiple stalks if you use a lot, then cut from each one as needed. The stems will take 2-3 weeks to fully grow back after cuttings. If you only cut leaves, it takes about 1-2 weeks.

But this varies depending on local conditions such as temperature, humidity, watering, fertilizer, sunlight, etc. Generally, more light hours mean quicker regrowing of the plant.

By now, you should realize how utterly basic it is to regrow this herb from scratch.

Whether you’re starting from seed or taking cuttings or just buying a pre-grown plant, there’s no reason to constantly buy more from the grocery. With just minimal work, you can grow parsley endlessly.

Sure, it does take a bit of work to get your first batch started.

But once you do get those cuttings rooted and planted, it’s smooth sailing!

Do you have any questions about parsley propagation? Or do you have any tips to share with other readers? Leave your comments in the section below and let us know!

I appreciate your feedback on this article. Please let me know your thoughts.

I’ve always been interested in gardening, but I never took it seriously until I was forcefully gifted an orchid. This was what got me into the hobby and I’ve never looked back. I enjoy writing about it, but not nearly as much as getting into the dirt and sculpting the perfect decorative ornamental to enjoy for the times.

Our latest plant guides written by gardeners just like you!