Cucumber plants can be pollinated by hand when the birds and bees don’t do their job.

In nature, honeybees and bumblebees will take care of the plant fertilization.

But sometimes, artificial pollination may be necessary. Cucumbers often require multiple visits from bees to fully propagate themselves. 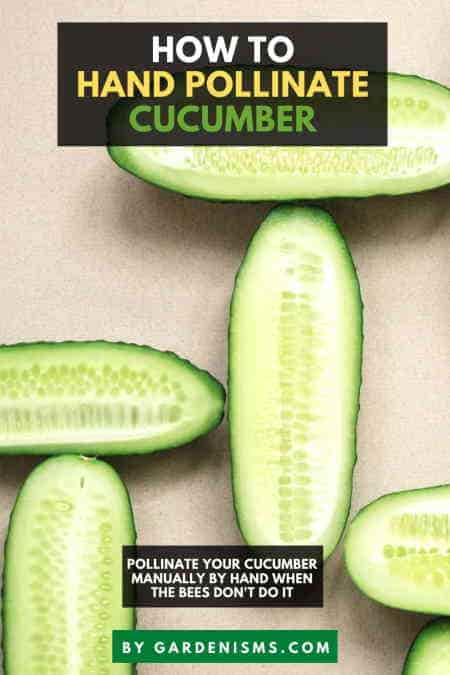 That’s where manual pollinating comes in- you!

Let’s learn about how to do this so you can get some excellent yield this season.

Why should you hand pollinate your cucumber?

If bees are hard to come by in your hardiness zone, try pollinating by hand to complete the process.

Small or poor harvest is usually due to limited natural pollinators. That’s where you come in to help!

If you have other veggies growing in your garden but your cucumbers seem to have trouble, this is normal.

Bees, birds, and the other pollinators in the wild don’t tend to like cucumbers. They’d rather go for juicy tomatoes.

Without them to pollinate, you’ll end up with some ugly looking cucumbers:

Bees are necessary for proper pollination of optimal yield and good quality cucumber.

But when they aren’t present in high enough numbers, you can do it by hand to help get more cucumbers or increase quality. They’re the main pollinator in nature for cucumber plants.

So it makes total sense why they produce those gorgeous, crisp fruit.

How does hand pollinating stack up vs. natural pollination by bees?

While hand-pollinating does not produce the same quality as natural pollination, it’s sometimes good enough for plants that either lack bees or help them out.

Sometimes, you can even produce larger cucumbers with both hand pollinating and natural pollination. Increase yield, flavor, and cucumber size by pollinating manually!

Hand pollinated flowers tend to produce optimal crops because you can incorporate your own pollination strategy to maximize the efficiency of your plants. You control when, how, and which flowers get pollinated.

Typically, you’ll use the later foliage. Late summer flowers tend to have a good number of both male/female flowers. Early batches generally only produce male flowers.

If you pollinate the younger vines early on, you’ll get some poor quality yields. Hand pollinating lets you give the plant some space to grow along with good numbers of flowers of both types.

This increases your chance of pollution. This is usually around 2 weeks after the blooms begin on your cucumber plant.

The good part about hand pollinating?

You have control over when you wanna do it! That’s something you can’t do with bees, right?

The first flowers are usually all male.

When the females come out, that’s the ideal period to distinguish between the two.

So if you’ve never done this before and you have no idea how to tell male vs. female flowers, be patient. It’s easy to tell when you have both sexes right in front of your eyes.

How do you manually pollinate a cucumber?

Self-pollinating cucumber is easy, but tedious.

When done by hand, correctly, it can be very effective for pollinating large crops of cucumbers.

Sure, it takes time to do it manually, but sometimes it’s the only way when you don’t have nature’s helpers to do it for you.

First, check for both male and female flowers. Both are necessary to pollinate, but I’m sure you knew that! Later cucumber plants that have developed contain both. This is why waiting for your cucumber to fully grow is ideal.

How can you tell if a cucumber flower is male or female?

The actual process of pollinating by hand is easy.

You may have to do several passes to get the pollen to stick to the female stigma.

It’s pretty annoying, but you can pollinate several female flowers with a single male flower. If your cucumber has more female flowers, it’s no problem!

Cucumber doesn’t make pollinating it yourself non-tedious, but it’s not too difficult either. It’s just time-consuming.

Now you know how hard bees need to work to get your cucumber pollinated!

How can you tell if a cucumber is pollinated?

If successfully pollinated, the cucumber flower will slowly begin to wilt.

It’ll drop its petals, dry up, and look like it’s ready to be pruned. However, there’s something magical going on right behind it. The new cucumber fruit will begin to grow.

You’ll notice it when it starts to take shape a few days after successfully pollinating it.

Here’s an easy way to tell if your flowers are pollinated or not:

Only the female should be wilting. Male flowers will drop off the plant upon being spent.

You should see both flowers falling off and flowers wilting of both sexes. This means that the hand pollination session was a success.

Do cucumbers pollinate themselves?

Cucumbers are considered to be self-pollinating.

But that doesn’t mean you can just grow a few plants and they’ll propagate on their own.

Male flowers can pollinate female flowers on the same plant, so it’s easy to propagate because you only need just one plant.

Hybrid cucumbers are also possible if you combine pollen from different species of cucumbers together and cross-pollinate.

Why are my cucumbers flowering but not fruiting?

Gardeners who’ve done this a few times will know to love wilting flowers because it means that the plant is fruiting.

You’ll learn this over time too- you don’t want to see those bright yellow flowers but rather see them drop off or wilt!

This is a good sign- the cucumber has been pollinated and is starting to grow buds for the cucumber fruit. Fruiting is fast. If you don’t see results within a few days after you pollinate, try it again rather than waiting.

You only have so much time within the season to propagate it.

Wilting flowers are good after pollinating, but any other time, they’re bad.

The same goes for your plant’s general health. Cucumbers need plenty of sun, high humidity, and a lot of water. The vegetable itself is over 96% percent water!

If you’re not giving your plant the basic necessities to thrive, it won’t. Cucumbers are pretty needy.

How do you attract bees to pollinate cucumbers?

Getting bees to come to your cucumber plant is just like any other veggie. There’s no secret.

Insects, birds, and other creatures are a close secondhand pollinator.

You want to make your garden appealing to bees by planting things they like.

Here are some quick ideas:

Check out this video for additional tips:

Why is my cucumber only producing male flowers?

Cucumber is notorious for stubbornly producing only male flowers early on in the season.

Throughout the spring, you should only see male flowers.

Remember that these are generally dominant during the early season. The males are found in small groups of 3-5 flowers per stem.

Be patient. Later on in the season at the start of summer or late spring, you’ll get more female flowers. They outnumber the males throughout the growing season.

So you eventually will have more females vs. male flowers on your cucumber but don’t fret, you can use a single male flower to pollinate multiple females.

Whether you’re using one or multiple cucumber plants!

Do you need two cucumber plants to pollinate?

Cucumbers are self-pollinating, so you only require one plant for it to pollinate.

If you have an abundance of honey or bumblebees in your hardiness zone, then it should be enough to get your plant producing fruit.

A single plant contains both flower types- male and female. This allows it to pollinate itself without 2 plants.

How long does it take for a cucumber to grow after pollination?

There’s no specific answer because like most plants- it depends.

On average, you can expect your cucumber to finish growing between 50-60 days.

Just because some strains are larger (e.g. Tyria which reaches up to 14 inches in 60 days!)It’s still ready to harvest around the same time as something like Little Leaf (which only grows up to 3” and takes 60 days). So it depends.

Should I pick the flowers off my cucumber plants?

Why would you? If you’re trying to pollinate, you need the flowers to grow.

You can pinch the stamen off and then rub it on the ovaries of the female flowers, but that’s usually not necessary.

Simply brushing the pollen onto the female is enough.

The bee pollinates because the pollen is sticky and sticks to the bee’s body.

Then it transfers it between the male and female flowers. It requires multiple bees brushing repeatedly.

That’s why you need to repeat it if it doesn’t work the first time.

There are cucumber varieties that grow without requiring pollination to produce fruit. These are known as parthenocarpic cucumbers.

Even though they have both male and female flowers, the unpollinated female will still produce baby cucumbers.

The cucumbers are also seedless. All female or parthenocarpic/greenhouse cukes don’t need male flowers to pollinate.

Gynoecious cucumbers only have female flowers.

Here’s a list of cucumber cultivars that don’t require pollination to produce fruit:

Feel free to do some research on them to see what suits your USDA hardiness zone.

Now you can pollinate by hand!

Cucumbers are known to be stubborn. It has specific requirements for optimal yield.

It likes the sun, but can easily dry up. It also doesn’t bring bees in to pollinate it without the help of neighboring plants that are more appealing to them.

So that’s where you come in to save it.

Pollinating by hand isn’t exactly a cakewalk, but you’ll forgo the tediousness for a bit so you can grow some huge cucumbers. You control the pollination plan. It’s yours.

Then you can enjoy your homegrown cucumber for salads, recipes, or even the healthy cucumber water.

What do you think? Do you have any questions?

Post them in the comments section and let me know! If you have tips to share with other readers, please let us know as well.

I’ve always been interested in gardening, but I never took it seriously until I was forcefully gifted an orchid. This was what got me into the hobby and I’ve never looked back. I enjoy writing about it, but not nearly as much as getting into the dirt and sculpting the perfect decorative ornamental to enjoy for the times.

Our latest plant guides written by gardeners just like you!